Ten years ago today, I lost my beloved Billie. It is very hard to comprehend that it has been ten years. Ten years since I held her and gave her cuddles, since I kissed the dip in the top of her head, since I stroked her warm tummy and when I stopped she would raise her paw and demand that I continue. 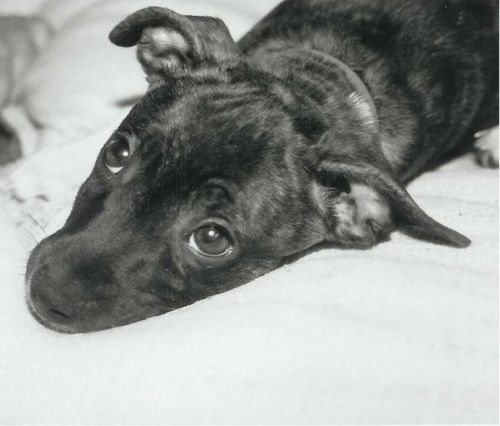 Billie was the sweetest, gentlest, most loving friend it is possible to imagine. She was a true companion, in person and in spirit. She accompanied me everywhere, her calm, gentle nature making her welcome even in places where dogs are not usually allowed. When I studied for an MA, she came with me to classes, sitting beside me for the three-hour workshop, an occasional lap from her water bowl, but otherwise not a peep. She loved going to pubs. At our local, the Lord Palmerston, I would buy her a steak (medium rare) and they would chop it up for her and serve it in her own special porcelain bowl. She came with me to work. I worked at the time, a couple of days a week in a literary agency. Billie came with me on the train, trotting along through the crowds of commuters, we would stop at the deli to buy her some snacks (parma ham, roast beef), then she’d curl up beside my desk as I worked. When she fancied a break, she’d wander off and visit the other offices. She would walk in on meetings. Several times, I was told that in the midst of a tricky negotiation, the appearance of Billie would ease the tension and make everybody smile. She came to launches, unphased by the assembled ranks of literary stardom, Billie took it all in her stride. 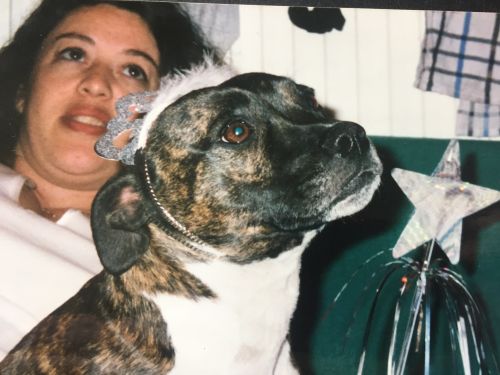 Billie handled London with aplomb. She travelled by tube, by bus and train. She loved to take the boat down the Thames to Greenwich, where we’d wander round the markets together, go to a cafe for lunch. But it was in the mountains of North Wales, where we spent several months every year,  that we shared some of our the most magical times together. We knew those mountains intimately. We climbed them in every sort of weather, sharing sandwiches behind dry stone walls to shelter from the wind. I loved the way we pooled our skills. Several times, when the mist came down, or when the bracken had grown over the path, it was Billie who guided us home. Once, on Cnicht, she broke a toe and I carried her three miles down to the road, her chin resting patiently on my shoulder, where, thank heavens, a passing farmer, took pity and gave us a lift. 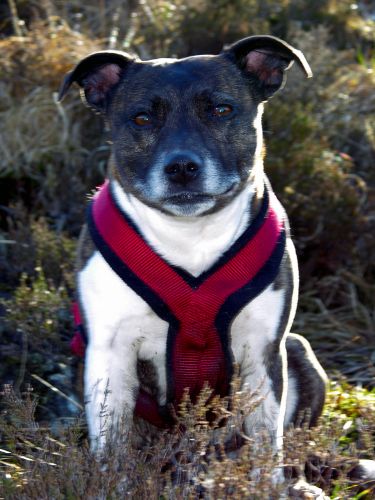 Billie was the sweetest friend. I was not in a good place when I got her, and she saw me through the most difficult years of my life, with her gentle, dependable love. The loss of her, aged ten, from a brain tumour was almost unbearable. The end was horrendous. She reacted badly to the euthanasia drug (an extremely rare occurrence, and almost certainly a result of the brain tumour making her reactions unpredictable. The neurologist, who was senior and highly experienced, was herself badly shaken by it), and this haunted me for a long time. Three weeks and one day after Billie, on 9th August 2007, my father died, also from a brain tumour. It’s extraordinary the pain you can somehow survive. 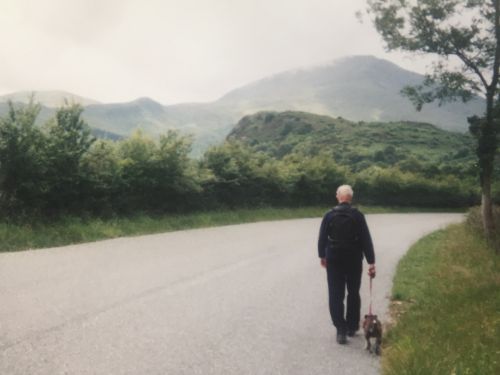 Billie with my father. This is the last photo I have of them together.

There have been an awful lot of losses in our community recently. Billie is an old timer now at the Bridge, and I like to think of her greeting Colonel Mosby and Kylie and Otis and offering to show them the ropes. She was not a boisterous character, not one for the rough and tumble. She barked maybe five times in her life. But should anyone be feeling in any way uncertain (are such things possible at the Bridge?), Billie will be there to reassure them, with her sweet, gentle presence, her constancy, her quiet, unwavering love.

Well I haven’t updated my blog in a while, which the reason why is very simple: life has been so BOOOOOORING I’ve had nothing to write about. Boring for me and Else that is, not for Mum, oh no, Mum’s had plenty of fun, gallivanting all over the place, to the South of France, to America, and Elsie and I just left behind, and nobody even thinking of us, except Auntie Linda, who sent us some toys, but nobody else even thought about us at all and especially not Mum.

And then when she got back she never even hardly looked at us, not even hello, just be quiet girls I’ve got to get this work done. Well Else and I we were so bored we were dying, especially me, I mean Elsie a bit, but especially me, cos Pies can get by, but Megastars need LOTS of entertainment.

Well, FINALLY, today, it was like Mum suddenly remembered I existed. Hey, girls, she says, so how d’you fancy going to the beach today? I’m like HELLO???? I mean, how do you THINK???? So then we got in the car and went, and seeing as how nowadays I only get to do something fun like once a decade, I knew I had to pack as much joy as I possibly could like into every single second. Elsie just pottered, but that’s Elsie for you. Pies potter, Megastars not so much, actually Megastars not at all…

So here’s the pics just to prove it actually happened, in case you think I must of been dreaming, which I wouldn’t blame you neither, I half think I was myself. 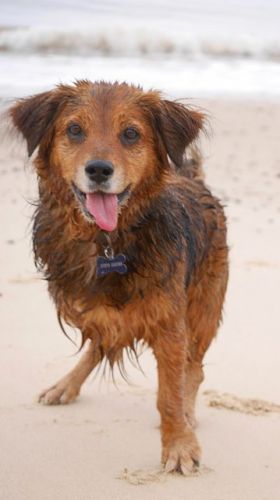 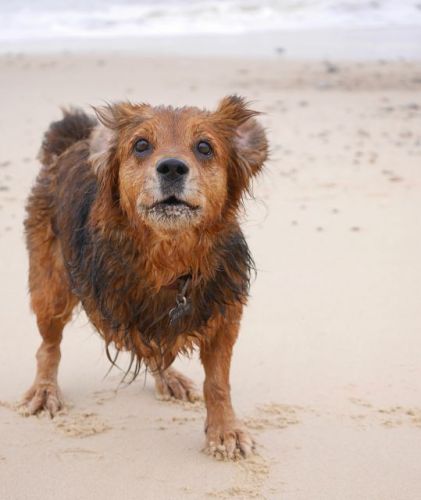 As I say, Else mostly pottered… 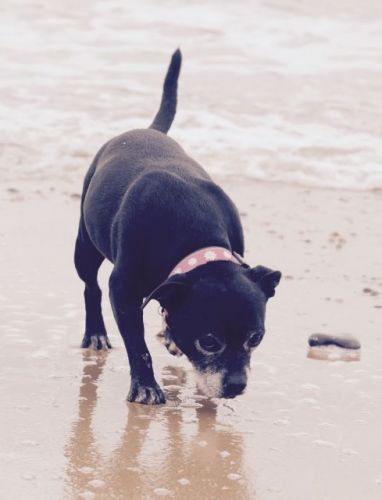 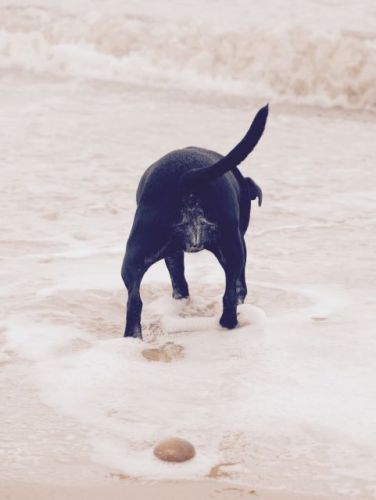 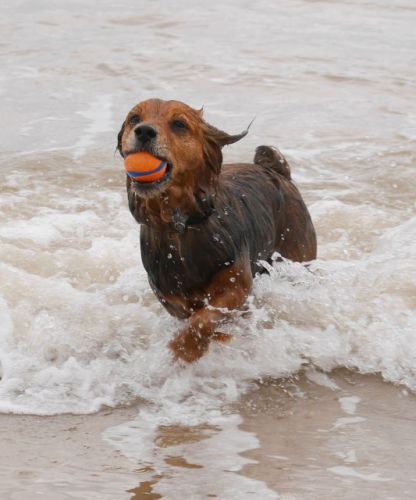 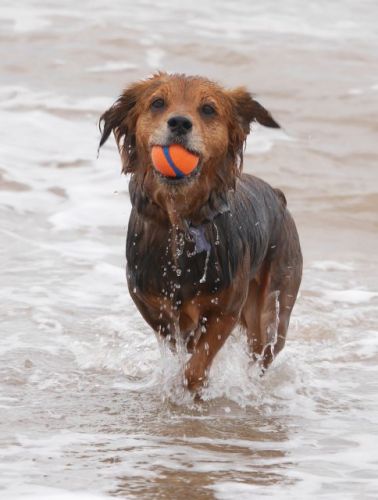 And then I did some digging… 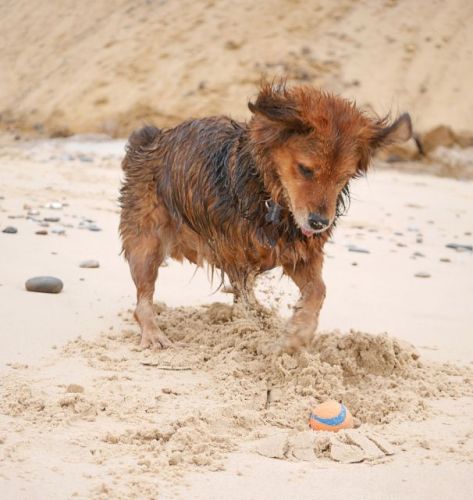 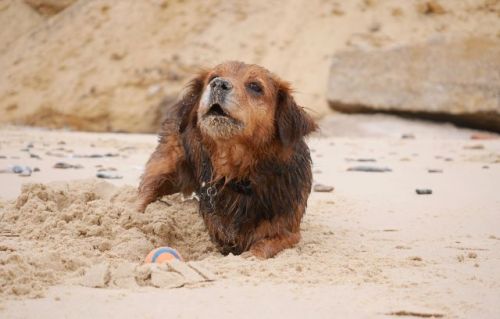 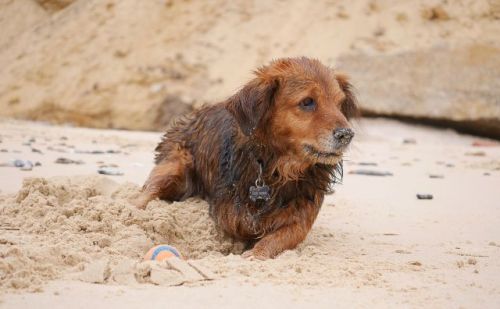 Else was still pottering… 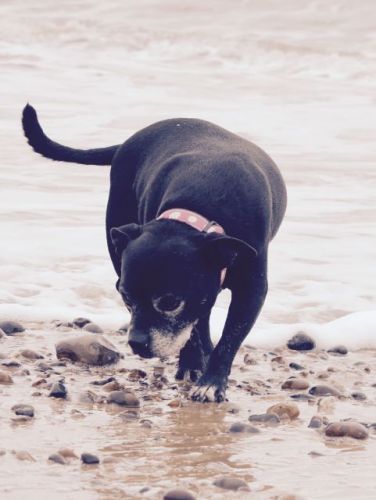 And then I had another swim, and Mum went all arty black and white, I’m like whatever just throw me the ball. 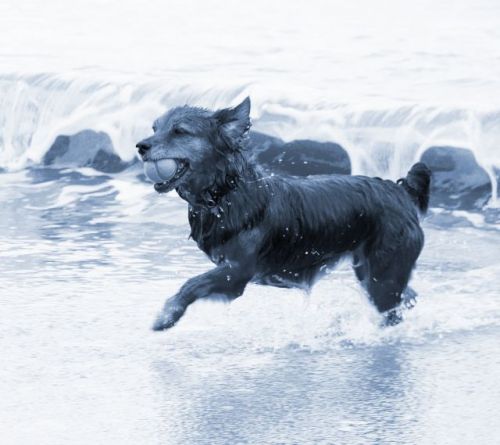 And Else thought for a bit. What shall I do now? I think I’ll go for a potter… 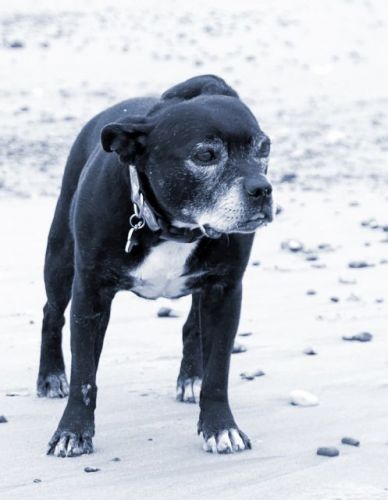 And then we did it all over again and that’s how we spent our day, and it really honestly totally was the absolute best day EVER. And I’m not saying Mum’s forgiven exactly for going away and leaving us but I reckon if we went a couple more times, well no promises but you know what I’m saying, let bygones be bygones and all of that, a couple more trips to the beach, a steak dinner, maybe, we’ll have to see… 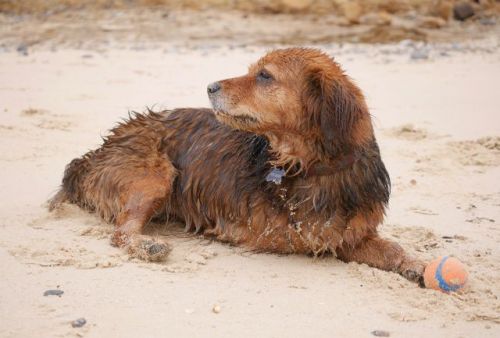