‘But Else got to go on the train,’ I tell her. ‘And buses. She liked to go on the top deck. She’d sit right at the front and pretend she was driving.’ 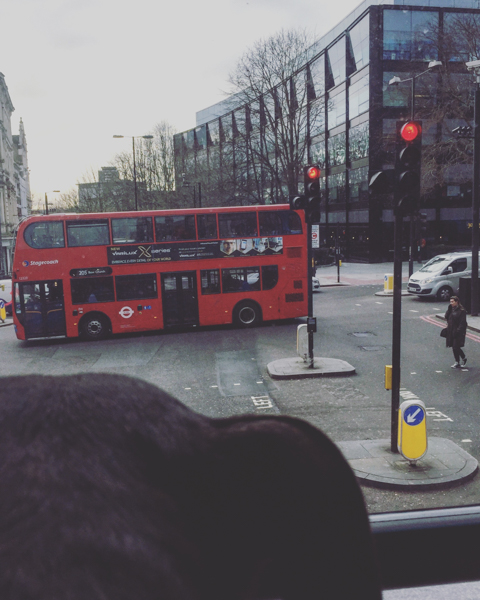 She’d sit right at the front and pretend she was driving.

‘You know very well what I’m saying, Meg,’ she says. ‘Don’t give me that look. You remember what happened…’

‘I can’t believe you’re STILL banging on about it…,’ I said, like give me a break. What happened was nothing basically. And it wasn’t my fault anyway. This busker got on, like came right in my carriage so I told him to get off, I mean as you do, and he’s really like arsey, starts playing his guitar, if you can call it playing, which you can’t, I mean not anything you’d call music, not unless you were deaf, do you know what I’m saying… Anyway, so I’m like this has got to STOP, not just for me but like everyone, it’s the worst sound you ever heard in your life, so I make a grab for his guitar, like spare us.  And all it is is a big stick basically, but you never heard such a fuss as there was, and nobody stuck up for me, no one, and we had to get off the train in disgrace, Me, Mum and Pie, and walk all the way home, and Mum said never again and we never did.

But like I say, that was YEARS ago. I’m like get over it, be more dog… So, on Thursday, right, it’s this BEAUTIFUL day. And it’s been damp and grey, like forever, but on Thursday, it’s suddenly bright blue sky and sunny and crisp, and guess what, the car’s in the garage, so I’m like let’s go to the Heath, and Mum says ‘I’m sorry, Meg, we can’t; the car’s in the garage,’ like I knew she would, like walking straight into my trap. ‘It’s a shame we can’t go by train,’ I said, all innocent. ‘It’s such a shame…’ ‘I know,’ she said. ‘But we can’t, and that’s that,’ and I just kind of shrugged, like okay whatever, but I made sure I looked a bit downcast, cause it might be the last sunny day we get ever, and I waited, cause I seen the seed was sown.

So maybe half an hour later, she looks at me. ‘I suppose we could try…,’ she says, and I’m like really noncommittal, like well only if you’re sure… So that decides her. ‘Come on,’ she says. ‘What’s the worst that can happen. Actually, don’t answer that,’ she adds quickly.’

So we did, and do you know what. It was the best day ever, and we took some photos to show you.

First we walked up to the station, which was really exciting, and they opened the special wide gates for us to go through. 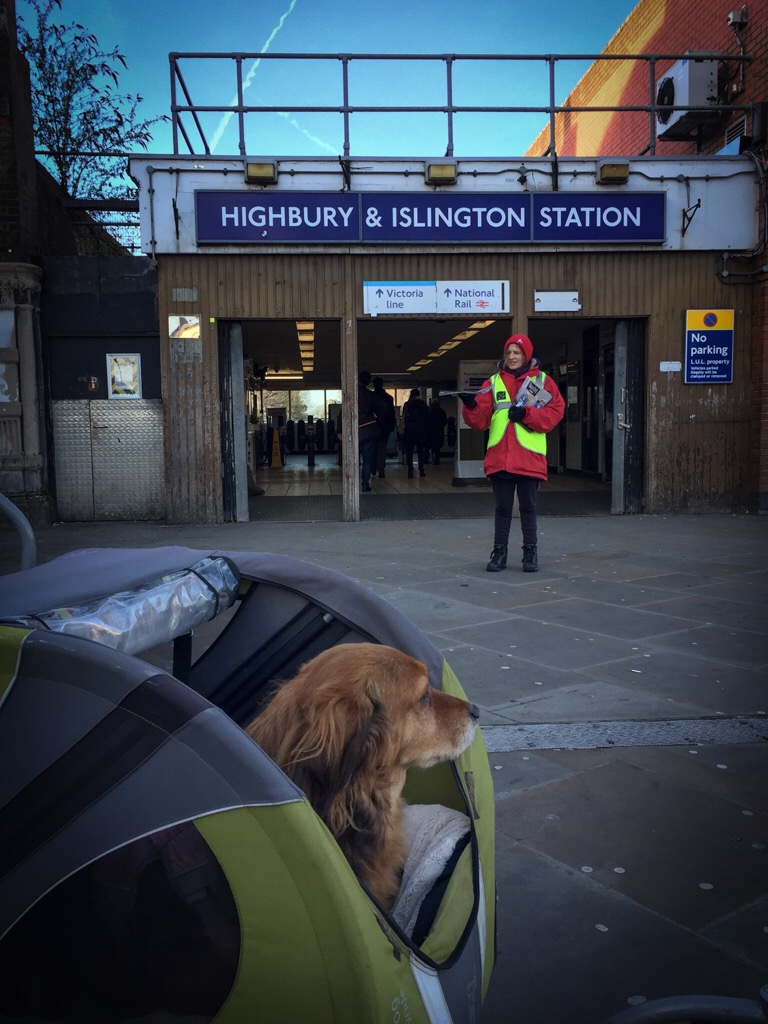 Then we got a lift down to the platform, so we didn’t have to use the stairs, and it was really good fun and Mum let me press the buttons. 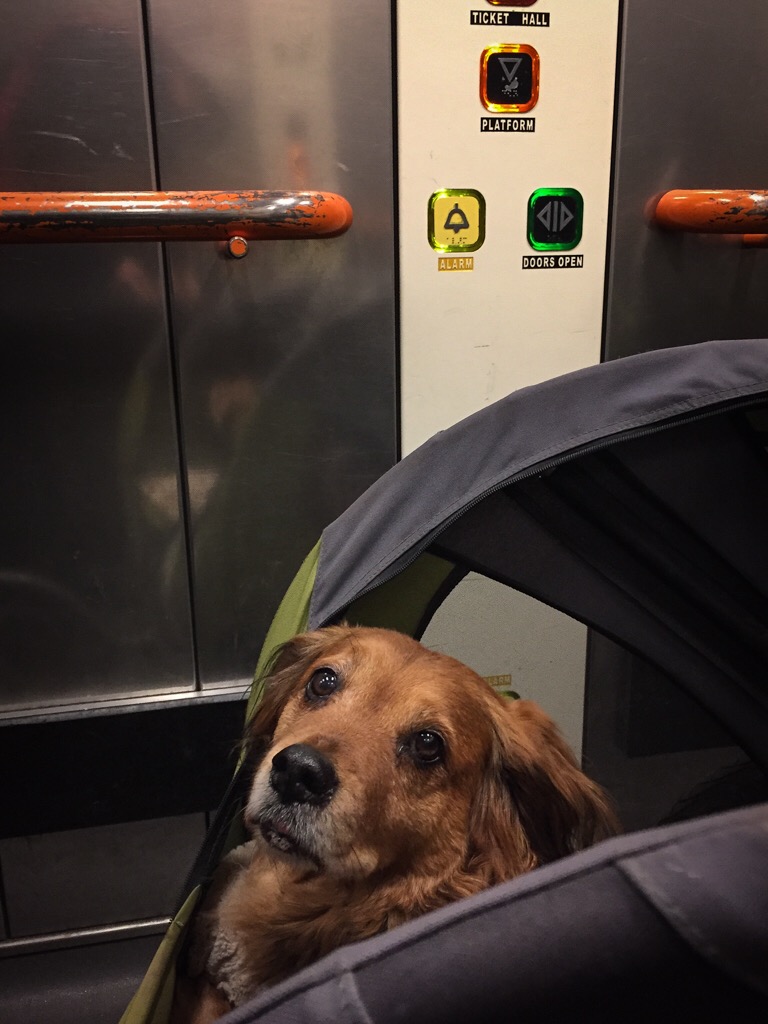 Then on the train, I got lots of treats. ‘Top quality treats,’ says Mum, ‘that’s the secret to travelling with dogs,’ which was quite rude actually, except they were nice treats. 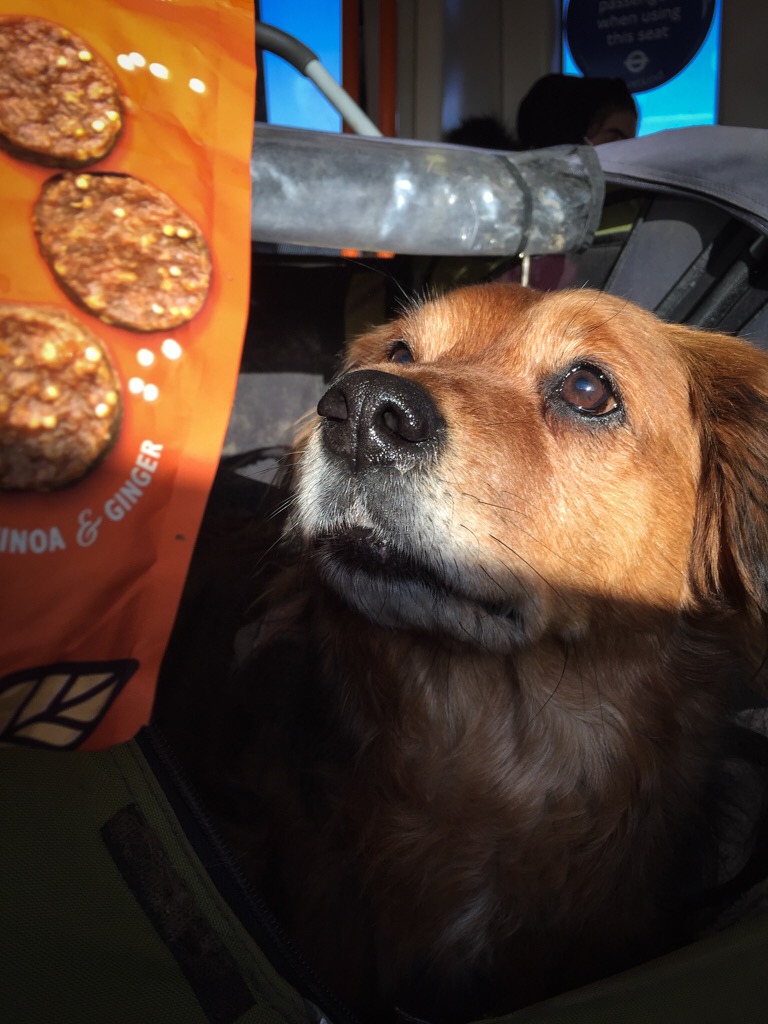 We got to Hampstead Heath in no time at all, which I’d like the journey to have lasted longer, but we climbed up Parliament hill and you could see all over London, which was cool, and we still had the journey back to look forward to too. 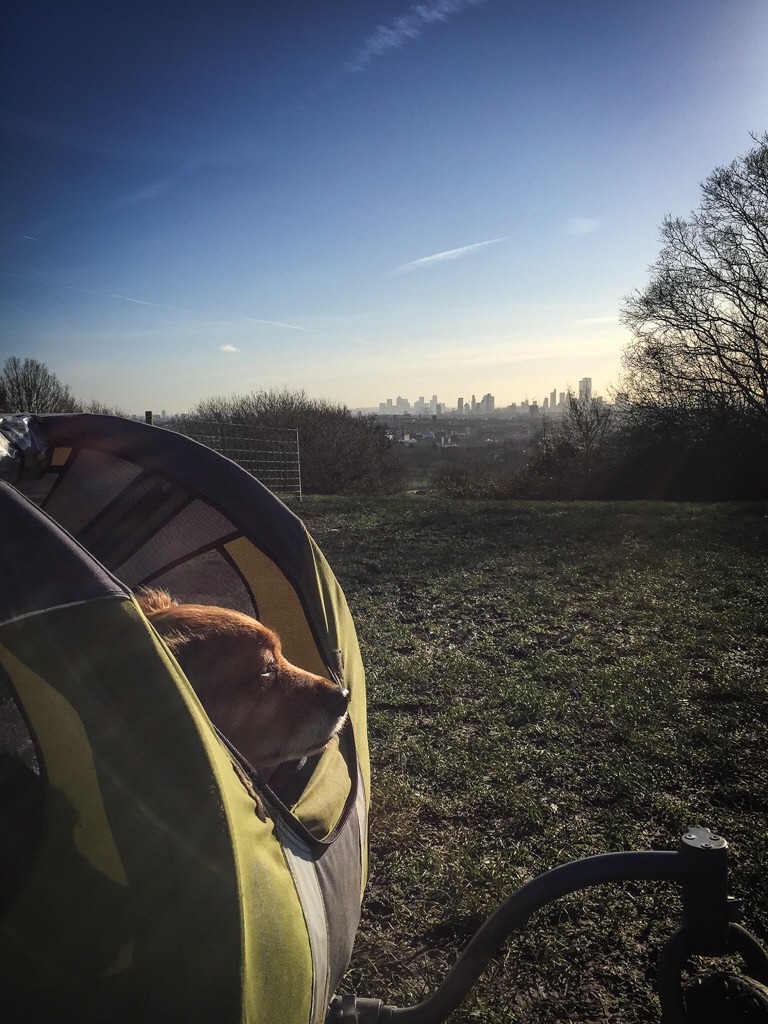 Then I got out for a hop and did some digging and just enjoyed hanging out in the sun. 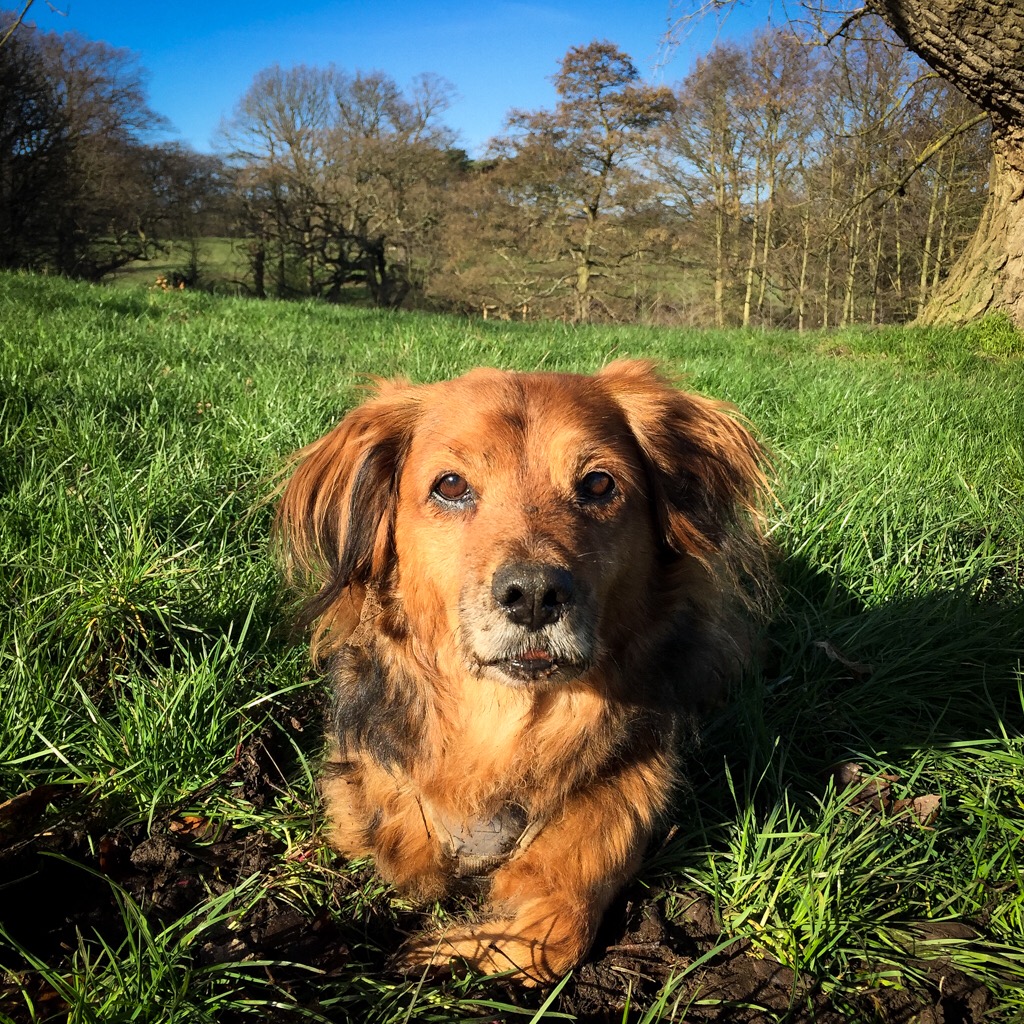 We went for tea at Kenwood and I got a sausage and then it was time to go home. At the station we got in the lift again, except the sign for the lift didn’t have any dogs on, which Mum and me both thought was wrong, so we fixed it for them. 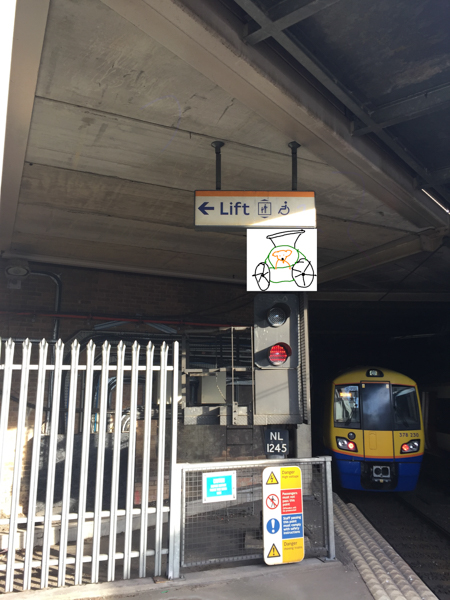 Then we waited on the platform and I was so excited for the train to come. 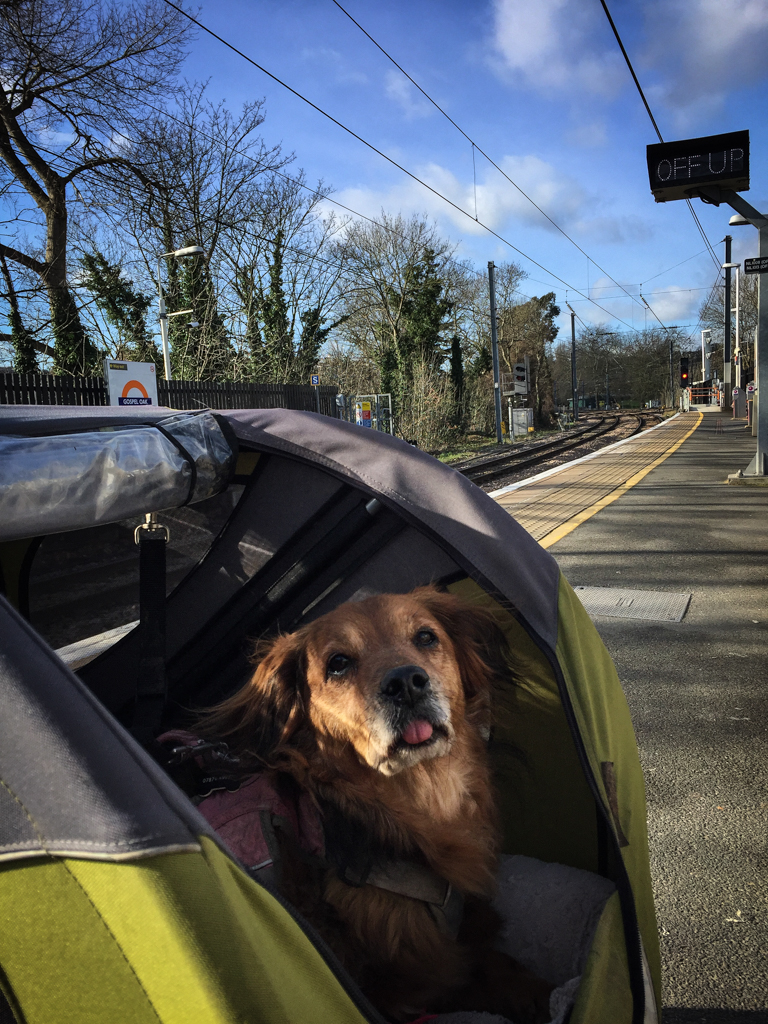 And here I am on the train, which you can see how perfectly behaved I am and how there’s no reason not to take me anywhere. 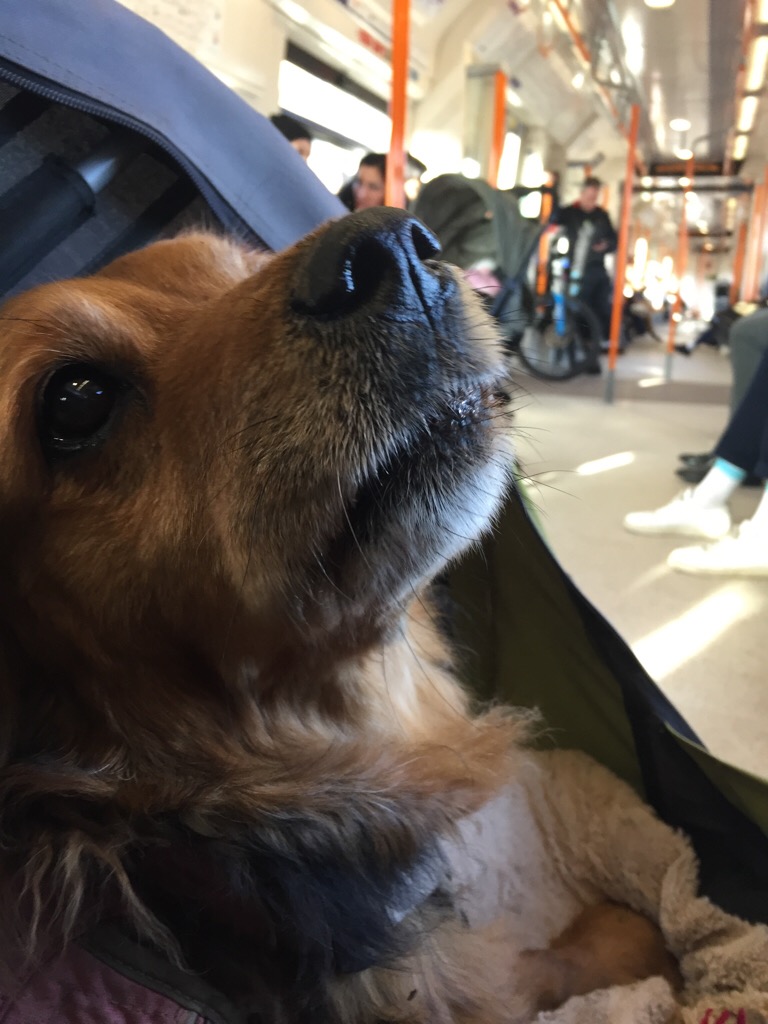 Then we were home. ‘You must be tired,’ said Mum. But I wasn’t, not at all, not the tiniest bit. In fact, I was already planning our next adventure. 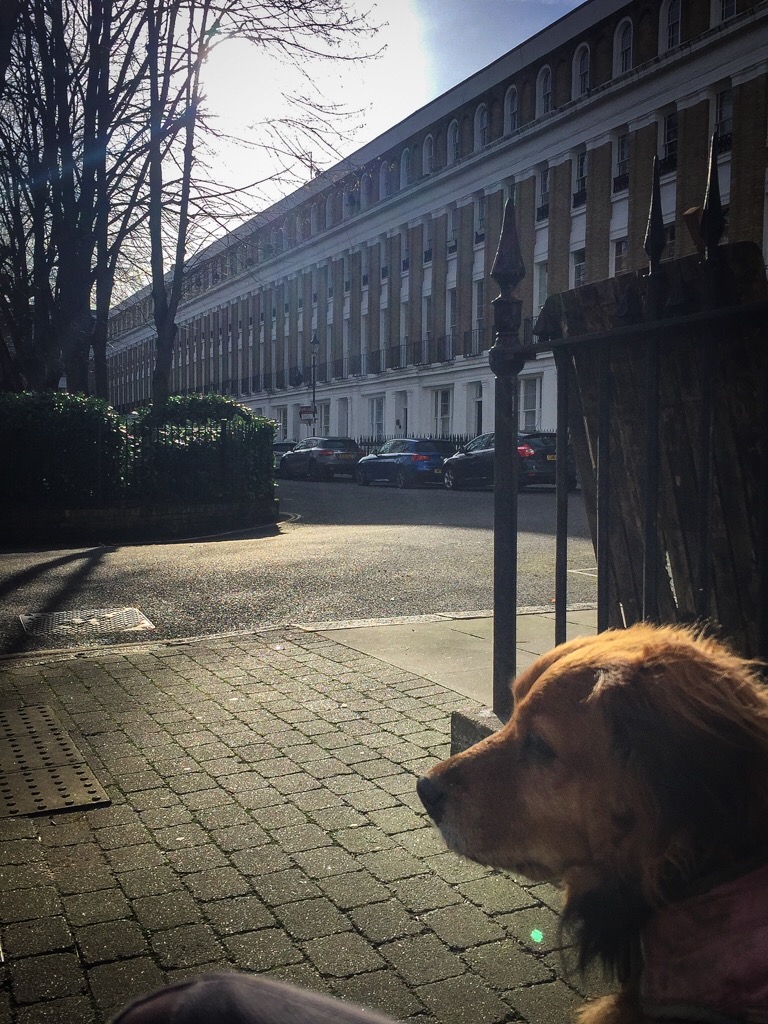 Thank you for reading,

Lots of love, from